The Real Winner of Pilpres 2014 is IT

We all know the result of this year's election stated officially by Komisi Pemilihan Umum (KPU) is won by Jokowi - JK. The official result you can see on this website: http://www.kpu.go.id/index.php/post/read/2014/3433/KPU-Tetapkan-Hasil-Pemilu-Presiden-dan-Wakil-Presiden-2014 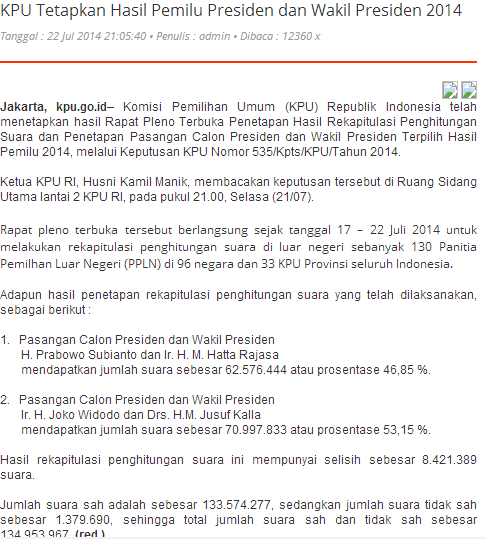 I'm not gonna bother with the result and stuff because that's been done and hey we all agreed on the result announced by KPU. What I'm gonna try to discuss on this piece I'm writing is another perspective on what else won during this election process.

Since the beginning of the Pilpres campaign  the people of Indonesia wanted a transparent, clean, and honest Pilpres process. Both parties were always saying "kawal suara kita" or guard our voice. Then for quite some time I thought to myself how could we actually help to guard our voice on the choice we've made on the ballot. You know what, actually I wasn't the only thinking about it. It turns out thousands, maybe tens of thousands people and hey maybe even millions of us were thinking the same about it. Then they started this movement called crowd-sourcing. I wasn't familiar with it at first but then I started reading a couple of articles of crowd-sourcing that were shared by a couple of my friends and lecturers on facebook (http://www.techinasia.com/kawal-pemilu-indonesia-presidential-election-fighters/). You can google about crowdsourcing but in short, it's an activity where tasks are done or delegated to a large group of people called community through an open invitation (correct me on this if I'm wrong).

Then comes the question, how can the people be involved in this crowd-sourcing activity to guard the election? Well the answer is through information technology. The election commission or KPU have given us the right to see the results on each of the voting places that occurred in Indonesia. And yes that means over 450,000 TPS or local voting place. We can see the results that have been uploaded by KPU on its website. Then a couple of people started making webapps that can count the results with the help of the uploaded results of each TPS. The websites that did this 'real count' are as listed below:
1. Kawal Pemilu (http://www.kawalpemilu.org/#0)
2. Herokuapp (http://rekapda1.herokuapp.com/locations/index)
3. Kawal Suara (http://kawal-suara.appspot.com/)
4. etc....

What each of these websites did was used the data provided by KPU to put in the number votes for each parties from each local voting place and count the results. This is not an impossible job to do, but yes it will take quite a lot of time if done by just 1 or 2 people. So that's when comes the role of crowd-sourcing goes to help. When the input process was done by let's say by hundreds of volunteers it could be done by only 3 days. And through this kawalpemilu and friends, we could then compare the actual and official result done by the election commissions. If the results from KPU were different from the crowdsourcing websites, we have a real problem then! But as it turns out, the final results from KPU are actually the same as Kawal Pemilu. See for yourself if you're still not sure. Compare this http://www.kpu.go.id/index.php/post/read/2014/3433/KPU-Tetapkan-Hasil-Pemilu-Presiden-dan-Wakil-Presiden-2014 and http://www.kawalpemilu.org/#0 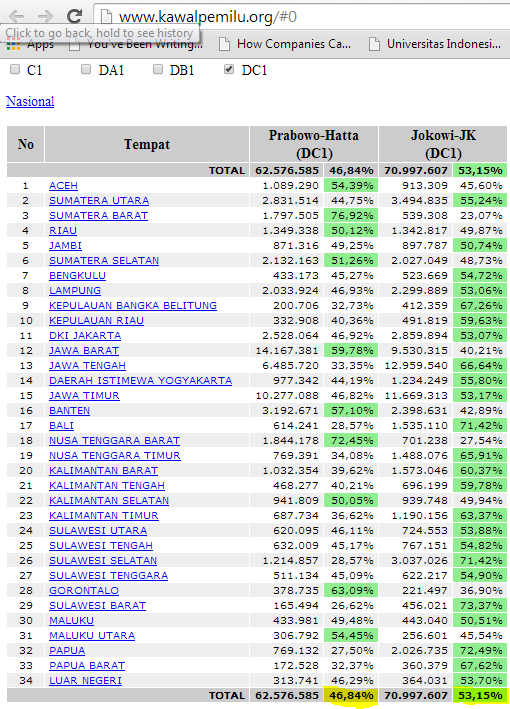 Back to the focus and point I was trying to point out. IT has become a big thing here in Indonesia and it's growing fast. Recently the national higher education selection was done, and I was a bit shocked when I heard that IT has become the most favorite field of study (science major) selected by the students. This is something that we IT students should be proud of, that each year, more and more high school students are more attracted to continue their study with IT. Hey, IT even passed the most popular major in the country "Pendidikan Dokter" :p 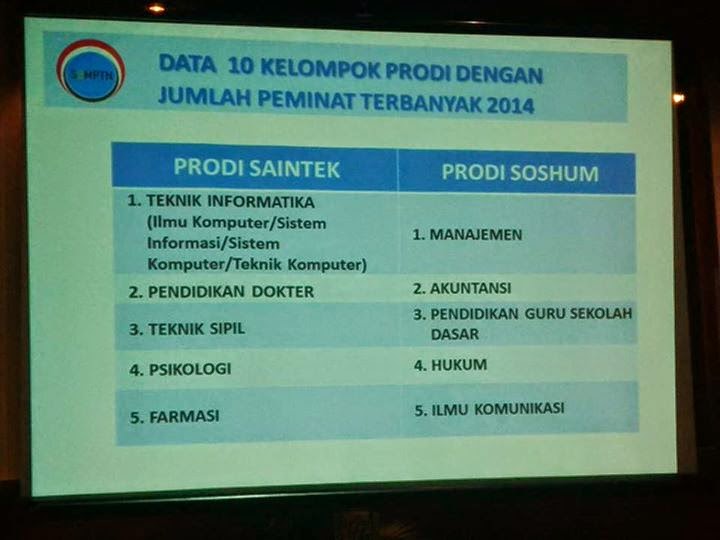 Not to mention there are a couple of IT related stuff also mentioned during the Pilpres campaign, such as e-procurement and e-government mentioned in the President candidate debate. Which means that the new president would continue to implement IT systems to help government's operations. And how can we left out the statement by Jokowi when he said "Panggil programmer, 2 minggu jadi". I know a bunch of you disagree with his statement that it's not that easy to develop IT Systems and it can't be finished within two weeks of development time. But let us all appreciate Pak Jokowi's effort in introducing to the people that IT can play a big role in the new government and behind the development there are those great programmers working their butt off to create such systems. I'm telling you, Indonesian programmers have never been that popular since that statement.

I've studied in the IT field for about 4 years now. From the courses that I've taken, all points out that IT will help people and business in particular. As an example, enterprise systems such as Enterprise Resource Planning (ERP) or Customer Relationship Management (CRM) and other information systems will make business more effective and efficient.

From this Pilpres, it's a proof that when IT is put to a good use it will give people and organizations tons of benefits. Well from this Pilpres two things that IT has helped:
1. Through the open data that KPU provided for us that was uploaded in their website so we can access and monitor each of the results from each of the local voting place (transparent)
2. The kawal pemilu website that people have been developed in order to do the 'real count' done by the crowds-ourcing community so we can guard the voters voice until the official results announced by KPU (guard the votes).
I am touched in the last couple of days until now, people with small or no IT background at all have been posting on the good use of IT, helping the election process through open data by the KPU and kawal pemilu by the crowd-sourcing community.

As a result, the expectation from the Indonesian people that we can have a transparent, clean, and honest election has been helped by the good use of IT.